La maison du fada, or rather “the madman’s house”, is the colloquial name given to Le Corbusier’s L’Unité d’Habitation housing project in Marseilles. The name arouses intrigue and renders the project a diversion. It has a childish appeal, like the building itself, which jumps out of its surroundings and sings colour from its windows.

L’Unité d’Habitation was Le Corbusier’s attempt at a utopia. Completed in 1952, it was an architectural project which sought to heal the wounds of post-war Marseilles and incubate the next generation. In photographing Le Corbusier’s housing project, Lucien Hervé made children his focus. However, it is important to stress just how rare human subjects are, of any age, in architectural photography; if people are photographed, they are photographed with a purpose. Thus, in Hervé’s photography it is important to ask whether the focus of children intends to enhance the optimism of Le Corbusier’s architectural utopia, employing them as a symbol of hope, or if instead, they are chosen as subjects susceptible to the “madman’s” diverting.

In discovering Hervé’s photographs amongst the Courtauld’s Conway archive and participating in the broader volunteering scheme, I could not help but reflect upon the act of labelling and giving something a name. Each image has its own code which refers to its box, folder and then place in a sequence. This act of labelling creates its own narrative; the code tells the wider story of the Courtauld’s efforts to organise and digitise the Conway photographs with the help of hundreds of volunteers, and in this, humanise the archive too.

Although this narrative is of a second order to the narrative of the photographs themselves, the Courtauld’s emphasis on retaining the physicality of the photographs, from the fibre of the brown paper they are mounted upon to the spidery annotations around an image, means that no narrative is prioritised over another. The Courtauld is striving to aggrandise the photograph’s status as object, rather than objectifying an image completely on the institute’s own terms and erasing its history. The Conway digitisation project honours how an image has been objectified in the past, and with this, creates a layering of meaning and proffers a plethora of stories which frustrates the idea that labelling is an industrial process and therefore a reductive or homogenising way to treat the photos.

In the Marseillaises’s nicknaming of Le Corbusier’s work “the madman’s house”, we see a similar supplementing and creation of narrative to that of the Courtauld. However, here the name personifies the housing project, rather than objectifying it by commenting on its physical form, like its other name “the Radiant City” does. This character of the “madman” disrupts Le Corbusier’s naïve, attempted narrative of L’Unité d’Habitation as utopia. The invocation of madness becomes confusingly human. We can imagine this mythologised figure in the same vein as Carroll’s Mad Hatter, dancing with joy and performing his hospitality, but if “madman” is to be taken more literally, he becomes a victim of the trauma of war too, a man haunted by the contemporaneous austerity, as well as the past, and still suffering below his colourful pretence. Le Corbusier saw L’Unité d’Habitation as a remedy to «les maladies de villes» but for the Marseillaises, the project, as a person, was still ill.

The two narratives of L’Unité d’Habitation as utopia, as well as a place of great instability and pretence, are in opposition. The full extent of the connotations which derive from naming a housing development “the madman’s house” unsettles Le Corbusier’s idealistic vision. The colloquial label is more understanding of the history before L’Unité d’Habitation; it is an interaction with the past, which acknowledges the preceding trauma rather than reacting to it like Le Corbusier’s project does. It is this idea of interacting over reacting, and subsequently overwriting a narrative, which founds the Courtauld’s sensitive approach to handling the Conway archive too.

Moreover, as subjects in Hervé’s photography, the children probe at the dual nature of L’Unité d’Habitation. The child’s indiscriminate and unassuming qualities mean that their interactions with the housing project are not marred by history like the adult’s. In Hervé’s work, adults are clearly preoccupied, turning away from the camera and staring listlessly at that which lies outside of the development. However, the children do not remember that which Le Corbusier is trying to forget with L’Unité d’Habitation. By consequence, they simultaneously complement the utopian idea of starting again, but also offer a vulnerability to the photographs, akin to believing that this so-called “unity of living” is the norm.

Hervé’s photographs which comprise children chasing each other between shafts of light and shadow come to represent the housing project’s competing aspects of the hopeful and the haunted. To the children, contradiction becomes a game, the light and shade facilitate play, they are suspended in L’Unité d’Habitation’s utopian narrative, creating imagined stories of their own, only related to Le Corbusier’s project through location. Through play, the radiance of the housing project with its floor to ceiling windows is equated to shadows created by the sun overhead. Here, the implications of the two names are not in opposition for the children; the children’s presence in the photographs becomes rehabilitative of competition and divisions in all their forms and thus inform the most pertinent of all the post-war reflections to come from the housing project, that unity can be found anywhere.

In July 2016, Le Corbusier’s L’Unité d’Habitation project in Marseilles and its other iterations in major cities such as Berlin and Nantes were listed as a UNESCO world heritage site. This accolade adds yet another label to Le Corbusier’s work and develops the narrative further. It is Le Corbusier’s utopia which meets the criterion of “providing an outstanding response to certain fundamental architectural and social challenges of the 20th century”, rather than the public’s “madman”. However, again, through Hervé’s photography of children and L’Unité d’Habitation, we see a visual recalibration and simplification of this criterion, as for a child, the project has succeeded if it makes him or her feel safe and content.

I was very moved by the happiness captured in this photograph by Hervé. The mother, who stares directly at the camera playing with her child, bypasses the adults’ preoccupation seen elsewhere in Hervé’s work; she is present in the moment, laughing and diverting the children herself. The skyline in the background creates a heavenly quality to the scene, the community of mothers and children are propelled above their surroundings, no longer contained by their apartments. Whilst the climbing frames themselves, with their abstract shapes and sloping angles, suggest another world entirely. The euphoria of this image becomes unearthly. The children and mothers are in a place together which supersedes the tangibility of Le Corbusier’s utopia and the “madman’s house”. They are genuinely happy and bolstered by a new-found sense of safety and longevity in this contentment. In this image, Hervé recognises that happiness alone is unchartered territory in the wake of the war, before we begin to consider the new spatial sensation of housing projects like Le Corbusier’s.

Ultimately then, Hervé’s work is no more about the children propagating an ideology of hope as it is about them being distracted from the outside world by an eccentric figure who himself, is somewhat afraid of the outside. Rather, I want to say that the photographs centre on a notion of individual transportation, a building of a habitat within above slotting oneself into a pre-packaged utopia. Whilst Le Corbusier’s architecture is certainly instrumental, and credited so in Hervé’s photography, to facilitating the contentment of the children, it only does so on a superficial basis. The children care for the light and shadows created by the huge windows and the paddling pool on the roof terrace, they do not care for, nor have need for the ideology behind their way of life. Children can make themselves happy through the living out of their own narratives, in both times of adversity and security. Furthermore, as with the Conway archive, narratives surpass labels in their power to evoke real emotion, and it is Hervé’s subversion of his own label, “architectural photographer”, which gave way to such touching and thought-provoking responses to Le Corbusier’s L’Unité d’Habitation.

Laon, a town in North-East France, has an immense and beautiful cathedral on top of a 200-metre hill, the location of the medieval walled town. It is one of the most important examples of early Gothic architecture.

Sixteen life-size statues of oxen look down from the top of the two western towers. As far as I can ascertain, such a number and size of sculpture is unique. 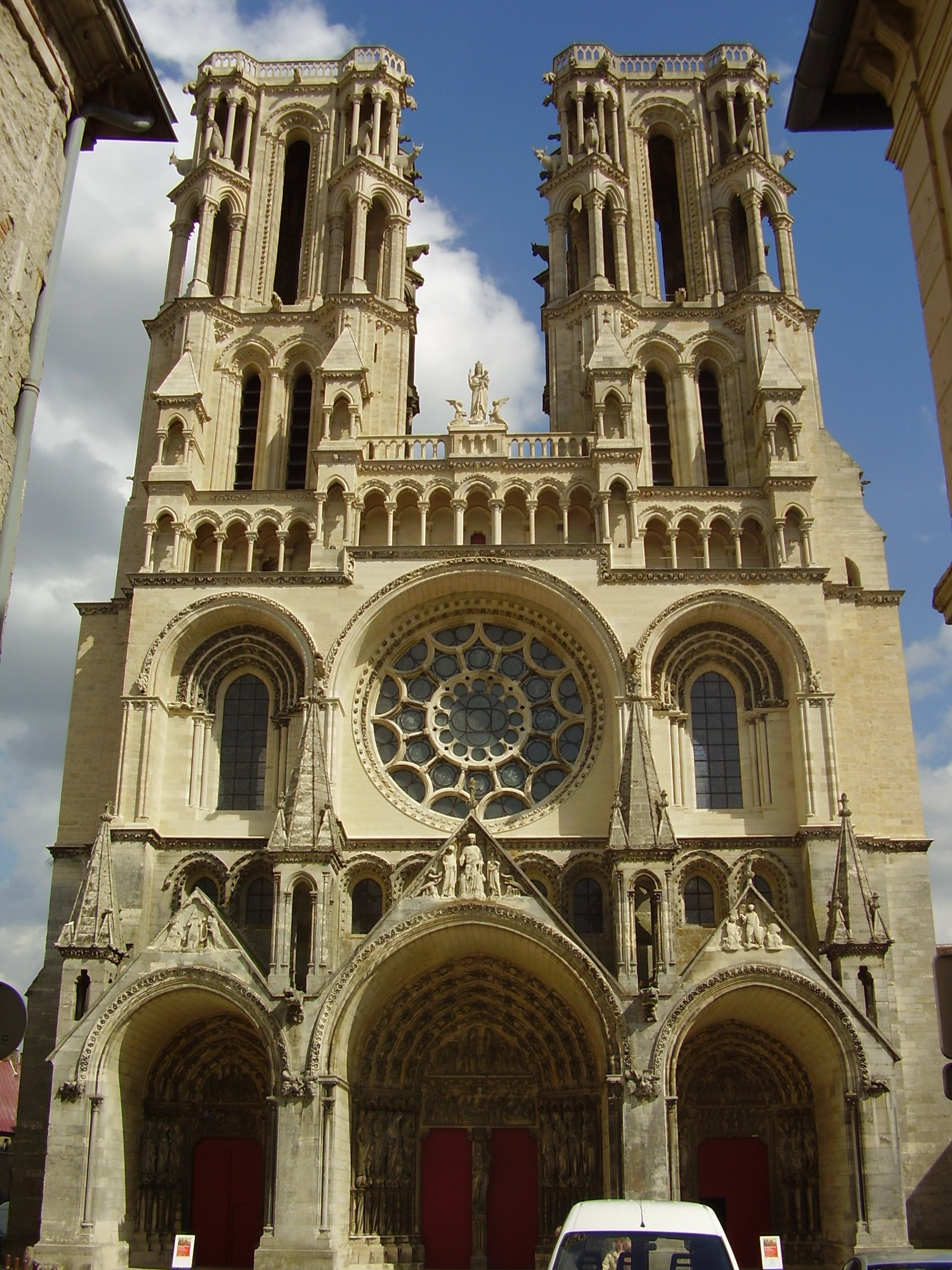 Medieval scholars mention them as an afterthought in their analysis of the cathedral’s architecture and history of development. Laon tourist web sites start with them, as if to say, hey, come to Laon and see the cows in the sky!

There is no documentation to explain the oxen’s presence. Local custom explains that they recognise the importance of oxen in the building of the cathedral, given it’s on top of a high steep hill. Leading on from this, folklore tells of an ox dying of exhaustion as it climbed the hill. The carter, desperate to get his load to the building site, was amazed when another ox appeared from nowhere, helped pull the load to the top, then disappeared before the carter could decide what to do with it. Another variation believes that the cart contained holy relics, and the appearance of the ox an act of God. The statues, therefore, record the miracle of oxen appearing out of thin air.

Putting aside the miracle option, the basic folklore is not immediately convincing:

As there is no firm evidence for their placement, medieval scholars simply acknowledge their existence, record the folklore and may make brief reference to the miracle story. My understanding is that it is not considered proper scholarship to speculate on secular sculpture and carving. This is understandable, so I have attempted to consider what circumstantial evidence may be available to indicate why the oxen are there:

All of the above is, of course, more speculation than circumstantial evidence, so I am not going to make it as a medievalist with this essay. I have considered the influences of the local economy, the town’s geography, the cathedral’s funding, the presence of the monarchy, and would be interested to know if anyone has any thoughts on other angles to consider, or if they are aware of similar sculpture elsewhere.

Perhaps the final word should come from WW Clark, author of Laon Cathedral Architecture (1983), who argued that the use of sculpture reached an unprecedented richness in Laon:

Their precise meaning remains elusive… they can be understood compositionally as the final accents in a design that integrates sculpture, both formally and iconographically, as inseparable constituent elements, beginning with the detail of the three portals.

Meanwhile, I may well feel the need to go and see them for myself.