Courtauld student ambassador and BA second year student Sophie Newton has written this awesome review on the British Museum’s latest exhibition. Catch it before it closes on the 5 July!

Defining Beauty, this year’s major Spring exhibition at the British Museum, is a must-see for any budding art historian. The display, although focusing on the sculpture of ancient Greece, draws from collections and cultures from all over the world and contains a variety of objects; from your typical nudes, to novelty-shaped drinking cups and 18th Century drawings of the Parthenon marbles. All of them have a single running theme, exploring the variety in ancient art and its continued influence throughout western art history.

The art-historical narrative of the west is almost entirely indebted to the discoveries and teachings of Ancient Greece. From the resurgence of interest in the Renaissance, through Johannes Winckelmann‘s writings of the Enlightenment to Jenny Saville‘s confrontations of the human body, the classical form has been constantly returned to, reinterpreted and re-evaluated. Their quest for the ideal and their achievements in doing so have remained iconic, no matter how many times they are seen and parodied. 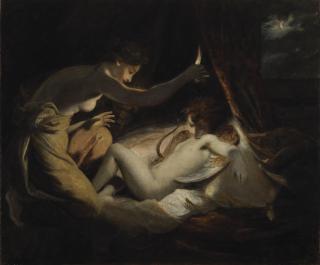 The exhibition explores these issues in relation to the lives and philosophies of the Ancient Greeks themselves, bringing in the original ideas of beauty, religion, daily life and reality while challenging the widely-held perceptions of the Classical Sculpture. Many of the objects are well-known, and to see them in reality really confirms the reasons why they’re so often written about. It begins with two often-seen objects, a crouching Venus in marble from the 4th Century and a 1st or 2nd Century bronze athlete. With their contrast, we are immediately presented with two of the major issues that surround classical sculpture – that the vast majority of originals were lost or destroyed, and that those that we do have access to are later reproductions, often from another culture entirely. The bronze is an original, found off the coast of Croatia in just 1996, while the Venus is a later Roman copy – it must always be remembered when thinking about ‘Greek Sculpture’ that more often than not we see their art through the lens of Roman admiration and imitation.

Does this affect our 21st Century viewing? Unfortunately, the exhibition highlights this issue without making much attempt to give a satisfactory answer, although a Roman nude displayed later on gives an amusing insight into how absurd our own Romantic view may look in the future. The contrast between the female deity and the human male, however, does set up for many of the other debates throughout the rest of the exhibition. Directly behind them stand three statues by the legendary artists Myron, Polykleitos and Phidias. Comparing each of their approaches in the attempt to create the perfect from, with mathematical precision in the spear-bearer (actually a 1920s German reconstruction – again, considerations must be made for the interest in neoclassicism in rising fascism), the careful balancing of opposites in the Discobolus, and the following of intuition in the River God taken from the Parthenon, we can begin to see the deep philosophical thought that went into the representation of the human figure, for both deities and for ordinary people.

(The Townley Discobolus and The Westmacott Athlete, The British Museum)

However, this link between Antiquity and widely-held perceptions of beauty and idealism is confronted directly afterwards with a display of how such statues were originally seen. Plaster models of statues reconstructed with the bright polychromy that continues to be revealed by imaging techniques such as x-ray and ultraviolet directly contrast to the stark white purity irrevocably associated with classical sculpture. Surrounding the four centre examples stand objects highlighting its wide-spread usage and variety, from the golden reconstruction of the legendary statue of Athena from the Acropolis, through Mesoamerican friezes and medieval Christian carvings, to finally the Treu Head where traces of the original pigment remains visible to the naked eye. Such a confrontation between perception and reality, in the art itself and in our study of it, forms a major theme in the display.

Other themes explored include philosophy and literature, and the influence these had on the development of more realistic art styles and beyond into the ideal. A trio of Kouroi, idealised male forms, in rough chronological order illustrate this development, with the Westmacott Athlete concluding the run. Further along, a highly feminised statue of Dionysus illustrates the continued experimentation of form in the search for perfection. Alongside this, explorations into depictions of women and conflict highlight the perceived difference between nakedness and nudity for the Ancients – for the Greeks, nakedness equated to a uniform of moral and social perfection, and thus the less-easily controlled female must remain clothed at all times. Venus, as deity and erotic object, is the exception. Daily life and social conventions and the effects these had on the perception of the body forms the next section, from key periods of an individual’s life such as childhood and marriage, to the depictions of love and erotic desire and the manner of viewing such scenes. How different can we view a statue of Venus in a religious temple from a prostitute found at the bottom of a drinking cup? A statue of Hermaphroditus from the Galleria Borghese and a vase depicting Kaineus illustrates the complexities of gender in the Greek world, and the attempts of art to illustrate such. This continues into examining the divide between human and animal, with the Centaurs, Amazons, Maenads, etc, all embodying the various forms of the definition of humanity and civilisation. Such range is illustrated in the character portraits of theatre personae and the posthumous portraits of philosophers – although the quest for realism led to the ideal, it also led to caricature and the development of portrait types. Greek depictions of non-Greek bodies as well as the Greek influence in the East also has a place in the narrative, illustrating the widespread reach of the Greek philosophy on humanity and its infinite beauty.

(The Belvedere Torso and Reconstruction of a figure from the Temple of Aphaia, Courtauld emuseum)

This is how the exhibition concludes, bringing us full circle in our evaluation of the Greek body. The Parthanon figure of Dionysus is displayed opposite the Belvedere torso, both objects that at one point embodied the perfection of the Greek form. Their influence, in the Italian Renaissance and in the 18th Century Enlightenment, as well as their continued admiration today, illustrates perfectly the reasons for Antiquity’s hailing and celebration. This exhibition both challenges and confirms perceptions of Greek art, broadening the definition of beauty beyond that which is commonly held.

I am so happy to reveal what has been going on with The Courtauld Gallery’s collaboration with Welling School and their year 7s. They spent today with a graphic designer, starting to collate their ideas around gender and The Courtauld collection into an exciting zine. For now here are some photos but expect a full report and the zines themselves when they are finished in the next couple of weeks!